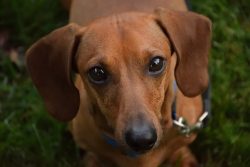 Are you considering a Dachshund for a pet? And why not, the dog is the 16th most popular purebred in the United States. Recent AKC

statistics showed the Dachshund as having the fourth highest number of newly registered dogs.

So they are popular, but does that mean they make good family pets? Since every family is different, a better approach to that question would probably be going over a list of things every Dachshund owner (or a would-be Dachshund owner) must know.

Dachshunds were originally bred to hunt badgers and other burrowing animals

Categorised as scent hounds, Dachshunds were bred to cover ground, sniffing out badgers and other small game.

You can help a Dachshund feel like they are “hunting” for food and treats by joining a nosework class or buying a snuffle mat.

Dachshunds are very loyal to their family. They love to snuggle with you on the couch, sleep with you in bed, and follow you around the house. They will be protective of their family members and sometimes one particular member of the family.

Socialization is very important so they don’t become super protective and lash out at strange dogs or people.

They have a potential for excessive barking

Some Dachshund may bark more than others but they are generally dogs that bark. You’ll have to work to train them to stop barking and keep it under control in most cases.

Dachshunds are smart and stubborn

For several years, Dachshunds were bred to scent, chase and flush out animals that live in burrows so they were bred to not back down, or give up, and to think for themselves. They will keep at any problem in front of them until they solve it. Unfortunately, they also use their superpowers to figure out things you don’t want them to.

You do need to show them, through absolute consistency, that you mean what you say. In other words, you must teach your Dachshund to respect you.

Dachshunds have a life expectancy of 12 to 16 years. Most live easily over a decade, so be prepared to be in it for the long haul.