Is the Shih Tzu a Good Pet for Your Kids? 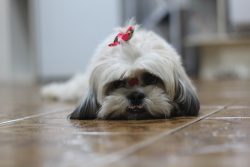 Originating in Tibet, the Shih Tzu has been bred for hundreds of years. They were pampered by Chinese emperors and prized as lap warmers. Eventually making their way to Europe and the US by way of England, the Shih Tzu has a long and colourful history. As such, it is easy to think that they’re a hardy, adaptable breed: best pets for your children, right?

Well, the answer isn’t that simple. Families with toddlers have difficulties acquiring young puppies because responsible breeders (and this doesn’t apply solely to Shih Tzus) will either insist on meeting with the entire family in their home or refuse to sell a young puppy outright. While adult Shih Tzus are sturdy and resilient for their small size, Shih Tzu puppies aren’t. By the same token, children in primary school are often well-behaved and easier to manage compared with those in the "terrible twos."

It goes without saying that Shih Tzu puppies require extra care and attention. Even a limber adult will have to make an effort not to trip over or sit on a Shih Tzu puppy much less a child who just learned to get on his feet unaided. At this stage, children also have a tendency to make sudden, unpredictable movements. If in the process a child should trip over or step on a puppy, either could be seriously injured – most likely the puppy since it is so much smaller. This is why breeders who do let a puppy go to a family with toddlers insist that the child sit on the floor when playing with the puppy. Also, if the child is sitting on the floor and the puppy squirms out of his arms, it doesn't have far to fall.

At no time, should children be left alone to play with a puppy. Children at this stage are learning to grasp the concept of delay of gratification and “meltdowns” frequently occur. A Shih Tzu puppy may become frightened and accidentally nip as a result. Additionally, children often have difficulty detecting when a puppy is too tired or not in the mood to play. This can again result in accidental nipping. The takeaway here is that children and puppies shouldn’t be left alone together because both are just starting to learn and adapt to their environment.

You probably know by now that this article leans more towards holding off on getting a Shih Tzu puppy until your children grow up a bit. But if you absolutely have to, make sure to consistently observe sensible rules, that way everyone – canine and human alike – will benefit.