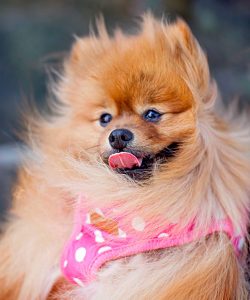 At some point, we all have to talk about it. Yes, your super cute Pomeranian is predisposed to health issues that commonly affect small breed dogs, illnesses such as collapsed trachea and hypoglycaemia.

The list provided below isn’t meant to scare you, but rather to make you better at looking after your pooch.

An accumulation of excess body fat or obesity is a common issue in Pomeranians. Given their small size, they don’t need a lot of food, so it’s common for pet owners to overfeed them. You know your Pom is overweight when you struggle to feel or see his ribs or spine; he has a bigger, rounder face; he has a sagging abdomen; he is reluctant to go for walks or when he does is often lagging behind.

Another common ailment in Poms, collapsed trachea is a narrowing of the windpipe due to the weakening of the cartilage that forms and support the trachea. When the trachea collapses, the airway is obstructed, resulting in a laboured, “goose honk” coughing.

Besides the cough, Poms suffering from tracheal collapse show symptoms like harsh breathing and gagging. The cough is worsened by exercise, heat, excitement, and humidity. Obese Poms are particularly vulnerable to this condition.

The thyroid gland is an essential gland in the body, producing a number of hormones, including T3 (liothyronine) and T4 (levothyroxine), both of which are required for normal metabolism in the body.

Hypothyroidism is a condition resulting from a lowered production and release of T4 and T3 hormones by the thyroid gland. If your Pom is showing an increase in weight, a lack of energy, itchy or dry skin, patches of fur falling out or a loss of mental sharpness, bring him to your vet and get him checked for Hypothyroidism.

Hypoglycaemia refers to critically low levels of sugar in the blood and is often linked to diabetes and an overdose of insulin.

Signs include the following:

When the kneecap is sliding out of place, you will see your dog limping or running with the affected leg held off the ground. He will also often stretch the affected leg out behind him in an effort to put the cartilage back into place.