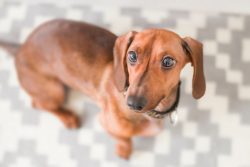 According to the AKC, there are two Dachshund sizes and three coat types. The standard size weigh between 16 to 32 pounds, while the miniature size weigh 11 pounds and under. The AKC doesn’t specify any height for Dachshunds.

A third size, known as the kaninchen or rabbit size, weigh between 8 to 10 pounds. The kaninchen, however, isn’t recognised by clubs in the US and the UK.

Also known as the smooth Dachshund, the short-haired Dachshund is the original variation of the breed. Their dense, short and shiny coat doesn’t shed extensively and needs little grooming. They have leathery looking ears and longer hair bristles on their underside.

It is believed that the long-haired Dachshund is the result of a cross between the original Dachshund and a spaniel. Originally bred to create a more weather-resistant Dachshund, they have sleek, slightly wavy hair that is longer at the neck, ears and underside of their body. They have to be brushed twice a week and bathed monthly. They are believed to be more docile than their smooth or wirehaired cousins.

With a wiry, short, thick, rough coat, bushy eyebrows and beard, the wire-haired Dachshund was the last to be developed among the three. Wire-haired Dachshunds are also the least common. Research suggests that wire-haired pinschers were perhaps crossed with smooth-haired Dachshunds to produce a variety that has excellent protection in dense undergrowth. Their wild looking coat requires brushing a few times a week to keep it manageable.